I’ve managed to catch a breath this morning, in between (another) water change in the aquarium, updating the Raspberry Pis and waiting for the new 3D printer nozzles to arrive today.

Lets talk water changes. So. When I last had tropical fish (probably 15 years ago), I got a tank, left it for a few days, got some fish, cleaned it out when it got dirty, cleaned the filters every few weeks, all was great.

I went down to the pet shop the weekend before Luke’s birthday, with the intention of buying him a £20 fish tank and a goldfish, maybe two.

Turns out you’re not allowed to do that anymore, at least not unless you have a pond that you can transfer said goldfish into when they grow bigger, and bigger, and bigger and don’t fit into that Spongebob Squarepants plastic aquarium with the handy little viewing portal anymore.

When I was little, you generally didn’t buy a goldfish, you ‘won’ a goldfish from a fair. You had a plastic bowl tank, generally kept in your kitchen and when you cleaned the tank (with soap and water, no less), you’d stick the goldfish in a mug to keep it safe. They lived for years, and we were always told that goldfish would only ever grow to the size of the tank.

That’s a load of rubbish.

Well, it isn’t, they will only grow to the size of the tank, on the outside, but their internal organs get too big and have no room, and they die after 2-3 years.

The average age of a goldfish is 10-15 years, some can live up to 30 years with the proper care.

So, goldfish were out.

There was a special offer on a tropical tank, £65 down from £95. Looked pretty nifty, a sizeable 40L which seemed pretty good. They’ve got this ‘points’ system which basically gives you a dead easy way of seeing a tank capacity in points and then choosing fish that can fit inside that points total.

Tetras are 1 point each. Goldfish are 20 points each.

40L for a little goldfish? mental.

Anyway, we got the tank home, I talked to some friends who are big fish keepers and they talked to me about the nitrogen cycle, I ordered water testing kits and water conditioners and Seachem Prime and everything else.

The nitrogen cycle is where the fish produce ammonia through waste excreted through their gills, this ammonia is eaten by bacteria and nitrites are produced, which are then eaten by a different bacteria - nitrates which is then removed either by water changes or another type of bacteria, if you have the right filter media.

It’s been a right pain in the buttocks.

Luke’s birthday was in May, we’re now in August and my tank still isn’t ‘cycled’. I’m definitely closer than I was, and I’ve pimped up an Interpet CF2 and created an awesome custom filter with the help of some handy videos on YouTube, added bacteria balls, done everything I need to, and we’re still not there.

We went away for a week to the caravan and I was worried about the ammonia, it was spiking to stupidly high levels within 24 hours of a 50% water change and you have to re-dose with Seachem Prime at least every 48 hours to detoxify the ammonia. If I wasn’t there to add prime, the fish would all probably die.

I tried a few things, almost bought a £70 dosing pump from amazon to automatically dose with prime every 2 days, but decided not to and did a full 100% water change and gravel rinse too. Washed everything, got the levels down to 0, before I went away and everything was happy enough. Filters were rinsed in old tank water to get rid of the gunge but otherwise, everything was treated with prime to dechlorinate and what have you.

We returned after 7 days and I did a water test and this is what we had: 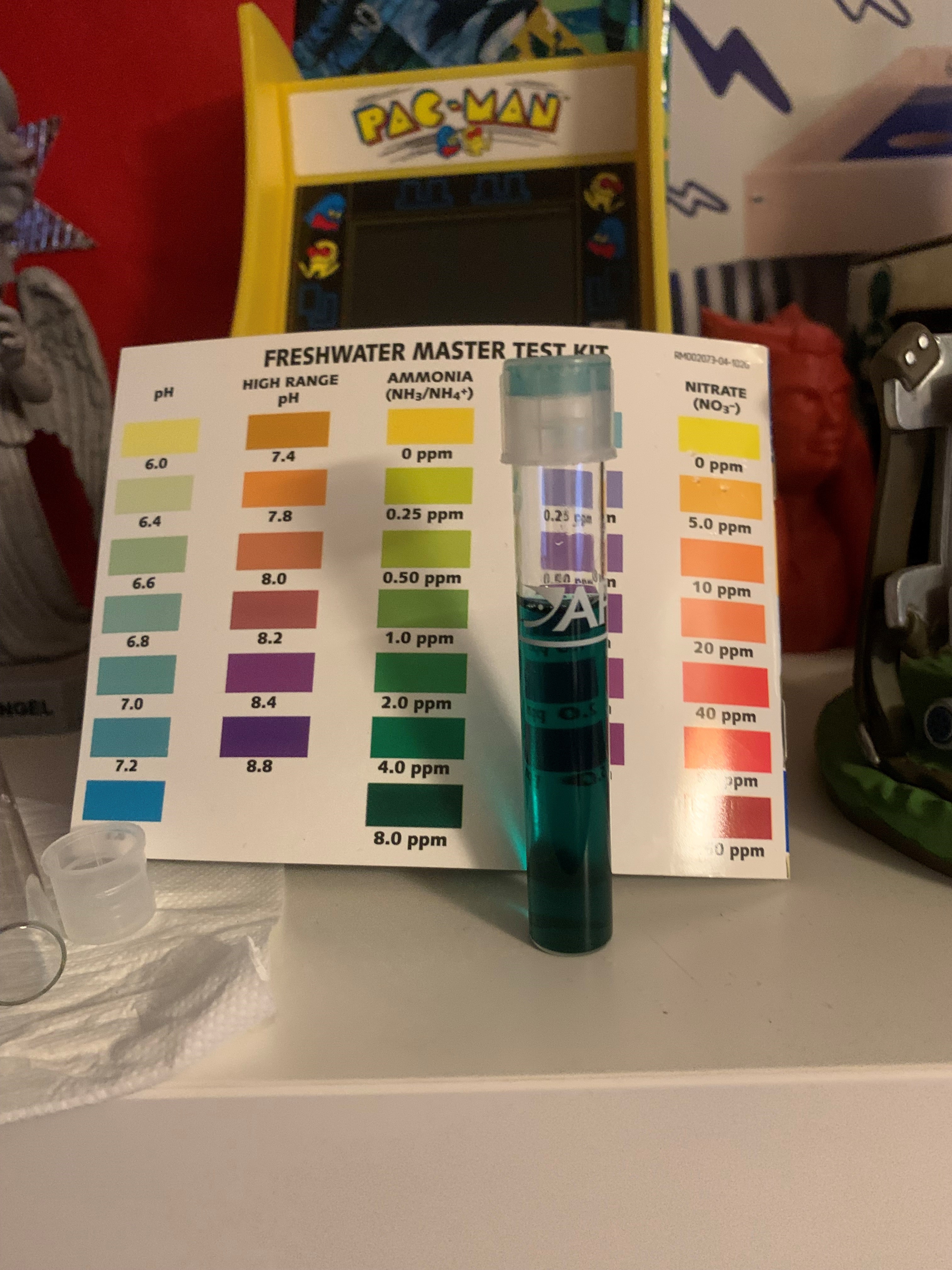 This is darker than the 8.0ppm, I don’t even know what colour this was.

All the fish (and shrimp) are present and correct, everyone seems happy, no evidence of gill burns or appetite loss, they are all eating properly and swimming around nicely.

I dosed with prime, then started with water changes - did maybe 50% water changes daily for 3-4 days after and got the ammonia levels down to 0ppm again. We’re now in a position where I can leave it 48 hours between water changes and we’re just getting to about 0.25ppm of ammonia.

Still 0 readings on Nitrite and Nitrate - but with me not going anywhere for the forseeable, at least I have the capacity to treat the water, change the water, keep an eye on the water daily. Which is all I need. It could well take another 6 weeks to cycle the tank, but I’m happy with the way it is right now, although I’ve had to buy another testing kit from Amazon as my testing kit is running low on the ammonia testing bottles.

I did another 50% water change today and rinsed out the filter sponges again in the water I was taking out, the water was black. At least it shows the filter is working though to keep the water crystal clear.

Was a little worried that the third shrimp had gone walkies, but he came out of hiding after a while and started to eat a shrimp ball. They’re fun to watch. Apologies for the focus on this one, they’re hard to capture whilst avoiding reflections from the glass and being able to get them in any sort of focus at all when they’re that close is a challenge. 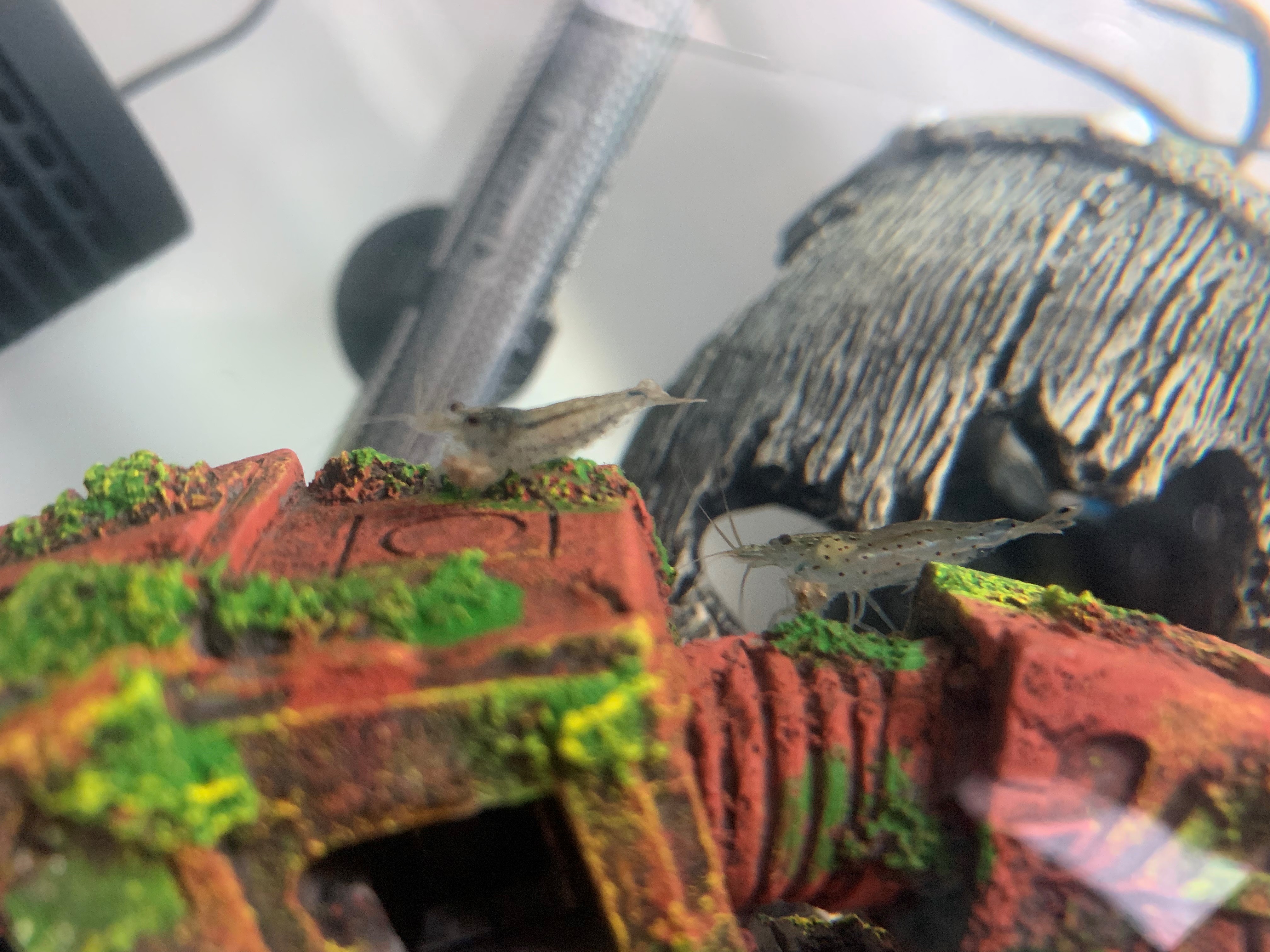 These fish require more upkeep than the dog, the kids, anything else I’ve ever known.

Our dog stayed with family whilst we were away - we felt he was a little too young to unleash on my mum and dads caravan this year, but we’ll take him next year for sure :)

He grew so much in that week we were away, we’ve come back and I struggle to pick him up now, it’s crazy how quickly they grow.

He had his first puppy groom a few days ago to start to get him used to being groomed and to clear the hair away from his eyes too. 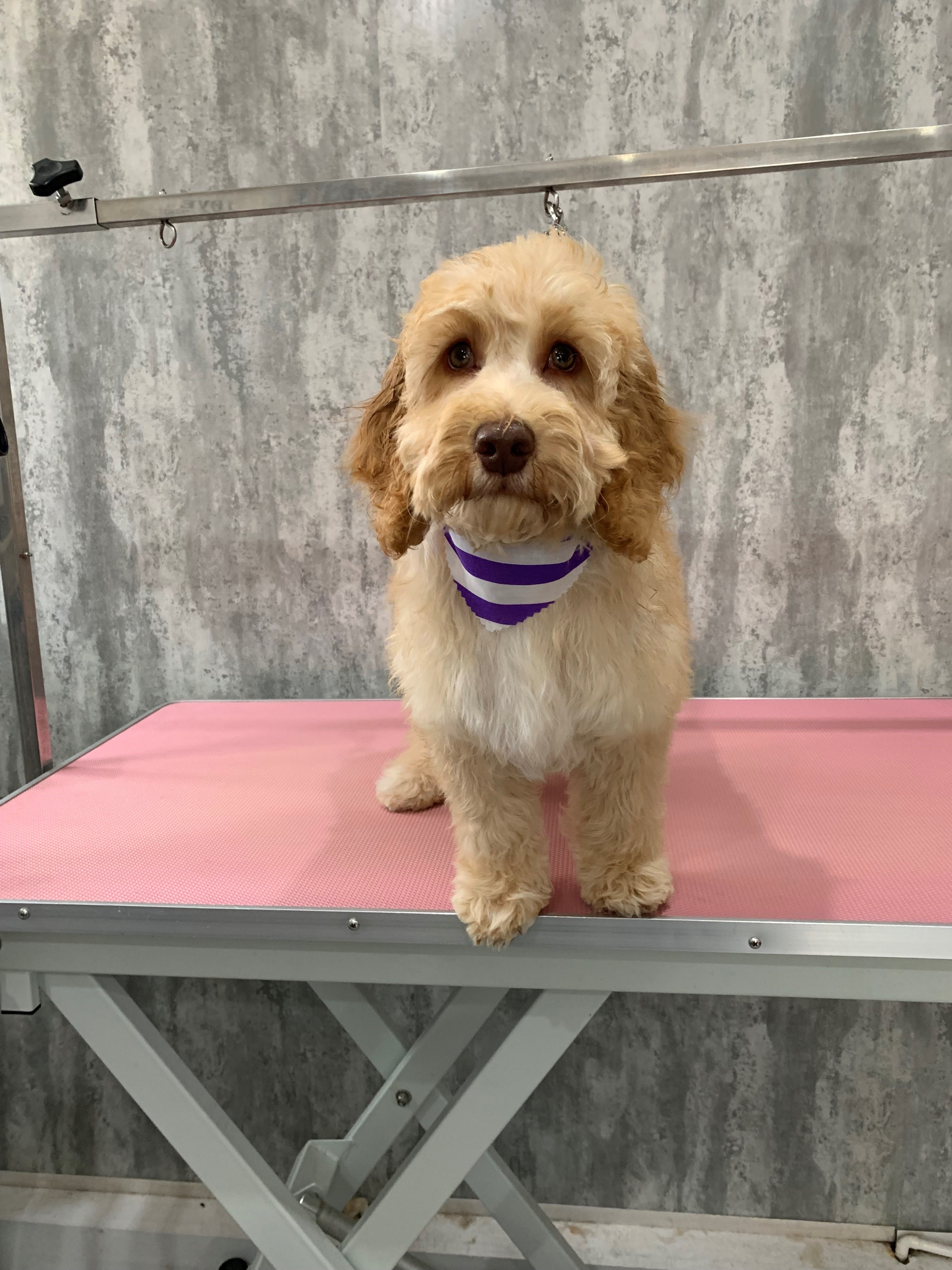 The plan last week when I was off was to spend at least a day or so looking at some new tech that I’ll be using in the new role. Unfortunately, the 3G/4G signal was so bad, it made even browsing impossible. When we’re so reliant on streaming for media consumption and Internet Connectivity for pretty much anything work/hobby related, it presents a bit of a problem. When you’re only a few hundred meters from the edge of the East Coast of the UK, surrounded by nothing but fields, seagulls and the sea I guess you can’t expect much else. Well, I expect it to be at least as good as it was 2-3 years ago. Someone has broken something somewhere for sure. 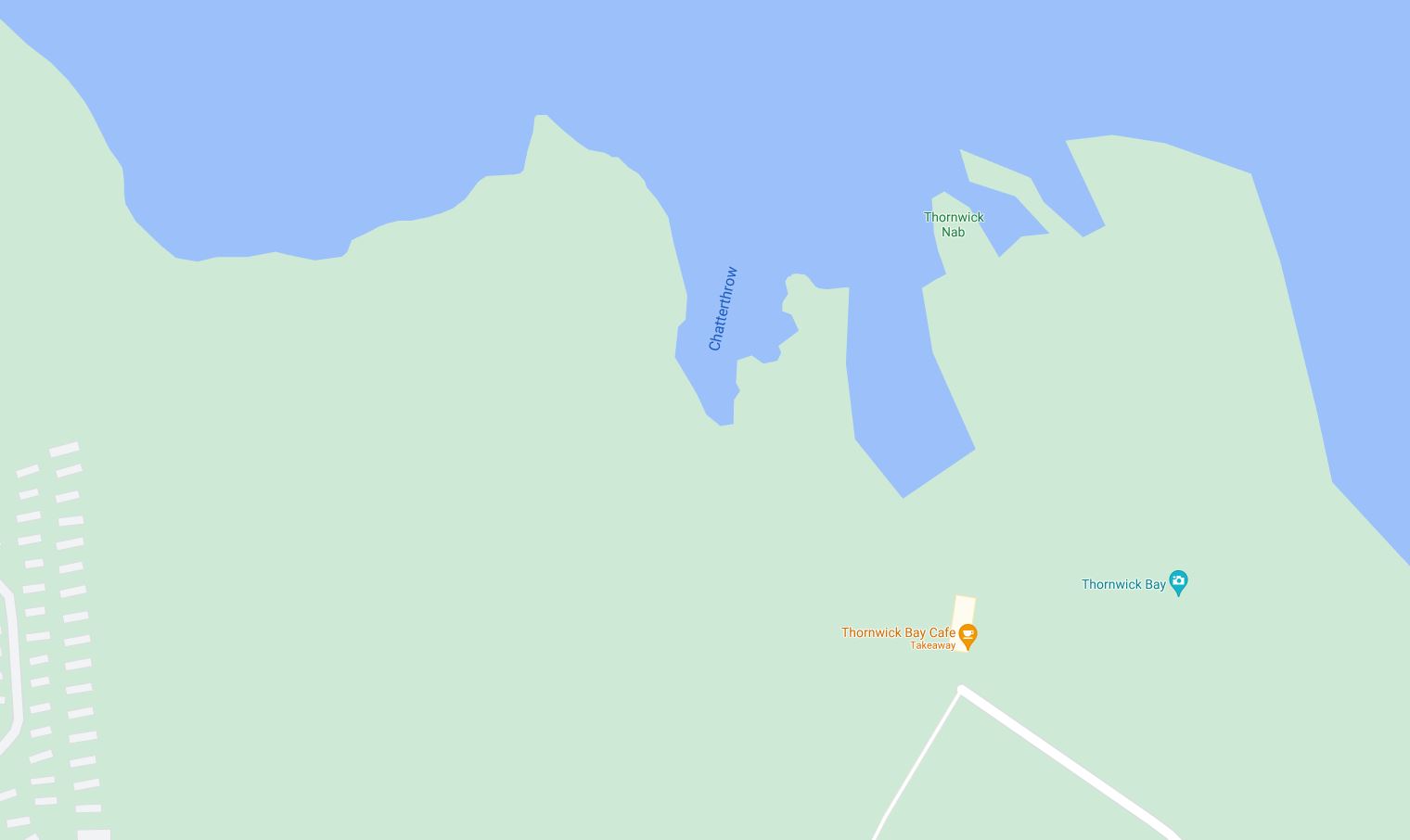 Now then, the 3D printer.

I was finally in a position where I was printing solid for around 4 days, even overnight - I said in the last blog post didn’t I?

Anyway, I keep trying to print these 9-10 hour prints and it’s stopping about 4 hours in. Looks like it’s probably retraction, I’m guessing the parameters on this different batch of filament are slightly different and it’s just getting mangled by the extruder gears. I’ve adjusted my retraction settings, I’m going to give them a go when the replacement nozzles arrive and probably run some retraction tests. I just wish there was some consistency with the Amazon deliveries. Some mornings they deliver at 8am, some days you can be lucky if you see them before 7pm, and other days it’s somewhere in the middle of the day.

Looking at the Amazon delivery ETA, we’re looking at between 3:30 and 5:30pm.

These inserts that I’m printing for Zombicide 2nd edition are really, really good and ensure that everything fits into the three boxes you get with the main box, reboot box and figure box, doing away with the weird moulded plastic holders for the minis and creating little stands for them to sit in. You can find it here.

Hopefully it won’t be long today before the parts arrive and I can start tinkering with the printer again. We’ll see. Every time I get into the flow of using it, I get a few more weeks out of it and then it decides to need some maintenance. It’s probably still easier to work with than the fish though.

I’ve bought a replacement battery for my 2013 Macbook Pro, it’s been telling me for probably a good 12 months now that it needs a service and I generally get less than an hour or so out of it when its not plugged in.

Taking these things out does not look easy, they’re glued in and depending on your model, there can be allsorts of cables routed in, on and around your battery, so you have to be extremely careful. I’ve got some spray duster arriving today too as there’s some interesting dust inside the fans and vents. I’m waiting for an i-fixit git with adhesive remover and a variety of tools to assist before I decide how to tackle it. I’ll probably photograph it and blog about it too. I’ll have to put a massive disclaimer on there that says ‘Apple say do not do this, there is risk of fire, explosion and death, so don’t do it’. If its the difference between £200 for them to do it and £80 for me to do it then I’m willing to give it a shot.